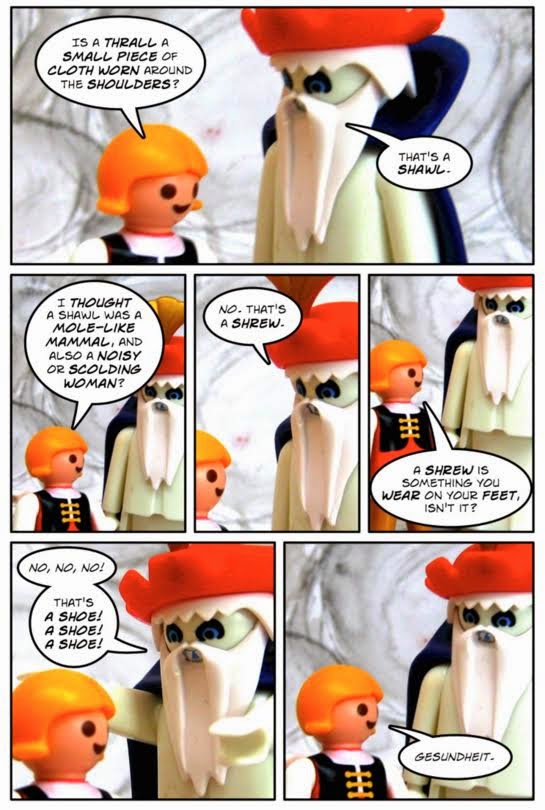 When did you start start self-publishing?
1991. Wow, that date scares me. But that's when it started.

I have collaborated with so many artists I wouldn't know where to start counting. One recent project (Duck and Quail) had ten artists alone. At a guess somewhere between fifty and a hundred people.  Recently, the most numerous collaborations have been with an artist from somewhere in the UK who only identifies himself as Skreem.

How many issues of Pistake did you produce? And when did you stop making them? 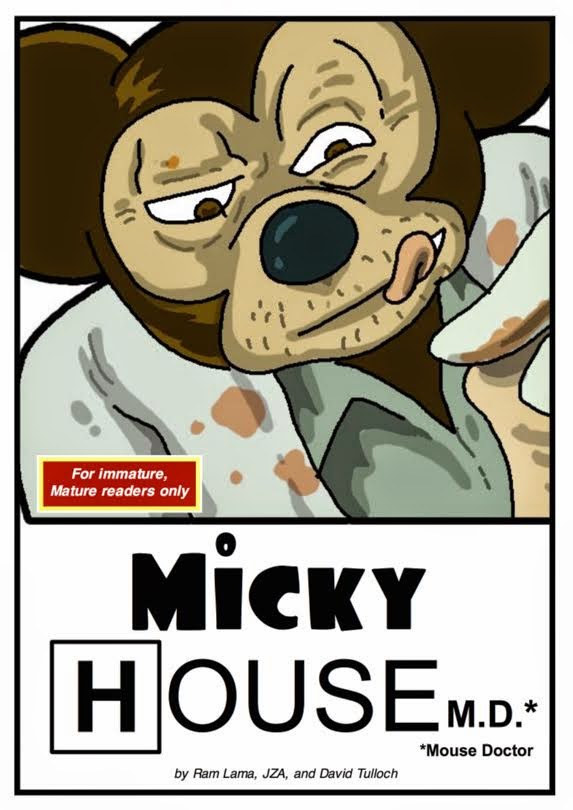 Before you started your website, did you publish any other comics or zines outside of Pistake?

After Pistake finished Straitjacket Ninja had a story in Corn Stone's UFO#1, and the nutty ninja was also published in the US by Kitchen Sink in an anthology title. But aside from that I wrote only prose for a while that ended up in a variety of publications from the School Journal to US textbooks on the History of Science.

Is it easier to self-publish now than when you started?

Yes and no. Yes, you can web-publish easier. No, printing was cheaper in the 90s. All the early Pistakes were photocopied for next to nothing, which is why we sold them for next to nothing. Now even printer ink is expensive, making physical self-publishing a problem. 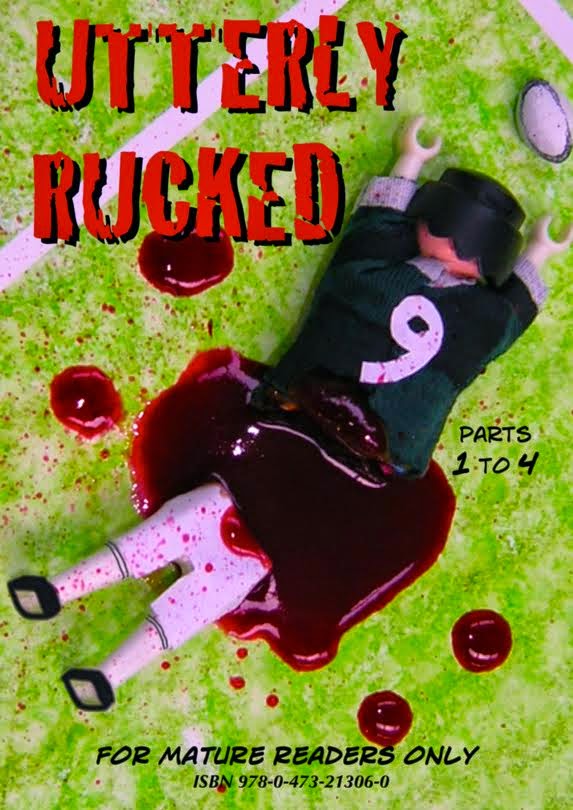 When did you start your website? And can you give me a link to the home page so people reading this interview can check it out?

www.virtuallycomics.com  Um, it started a few years ago now ... not sure exactly when. 2011?

Do you use your website to promote your printed material or is it the other way round?

You have two major works involving Playmobil figures, One of which is Utterly Rucked which I believe is available as a six booklet set. Will you be selling this at Zinefest? and can you give some background information on it?

Utterly Rucked is a horror/whodunnit/comedy about a rugby team getting slaughtered one-by-one while touring NZ. It was done after watching a terrible Australian cricket horror movie, and me saying I could have written something better that that. My wife said, "Okay then, prove it." My family helped me make the comic by sewing little rugby jerseys, making props, and helping with the photo shoots. It will be available at Zinefest, along with some postcards. 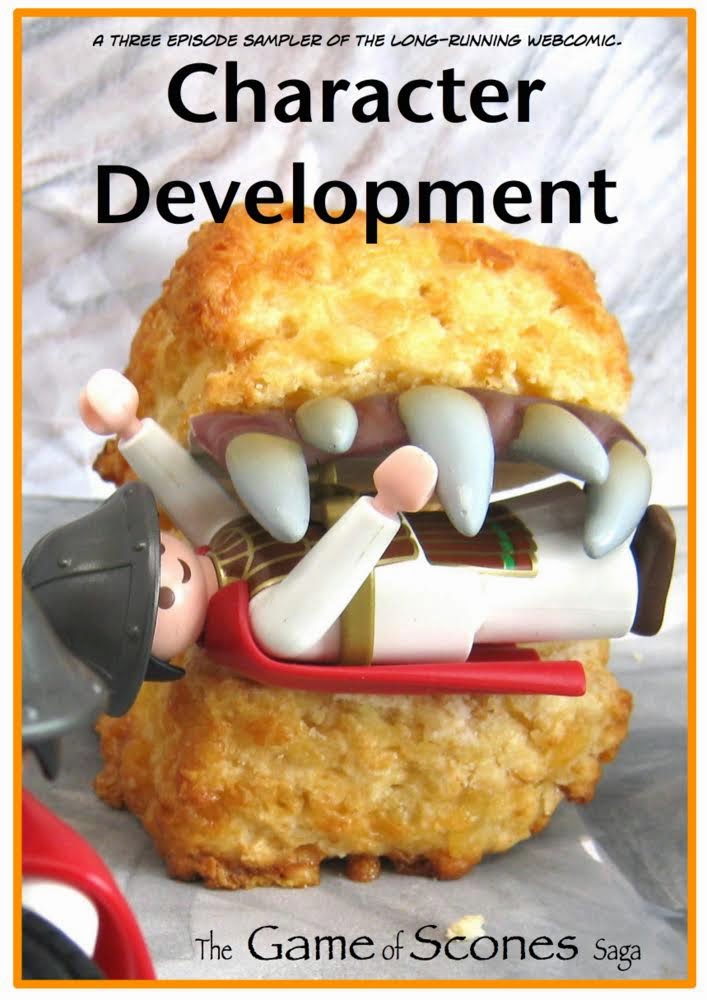 The other major playmobil story on your website is 'Character Development’. Whats that about? And how many pages is it now? Are there any plans to print that out or is it too big?

Character Development is a fantasy parody tale, currently on hiatus. It's over 1200+ pages, so too big to print. There will be a sampler comic available at Zinefest that has three episodes that make up the Game of Scones storyline.  New pages of Character Development will start being posted again in 2015.

Your current project appears to be ‘All unicorns to battle stations’, which you draw your self. Can you tell the readers something about that project?
It should be subtitled "David learns how to draw". It's main purpose is to make me draw everyday. It started out as 'cute' tales of my family, but now various other random things squeeze themselves in there as well, such as a celebrity agent who is managing Jesus on his second coming, and some animals fighting aliens on the moon. Two collections of AUtBS will be on sale at Zinefest.

Do you have any other zines on sale that you’d like to bring to our reader’s attention?

I'll be selling some other bits a pieces, including Tortured Plastic, which was a one-off collection of various collaborations with three artists. Duck and Quail, which collects 80 strips that appeared on the Drunk Duck website, drawn by ten different artists. There should also be some other stuff if I get myself sorted out in time. 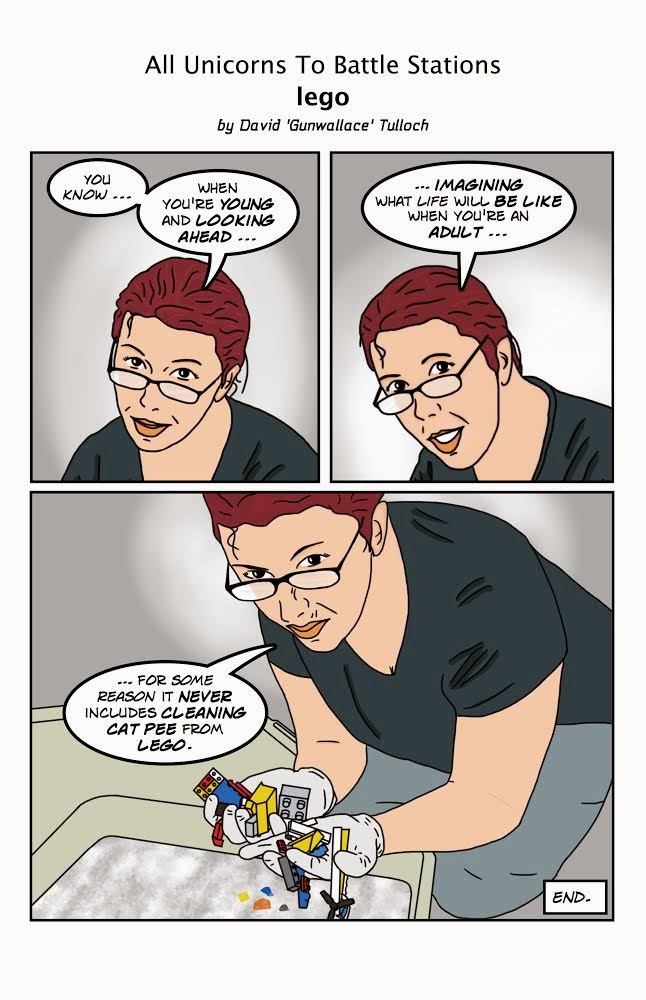 Posted by Wellington Zinefest at 5:59 PM No comments: 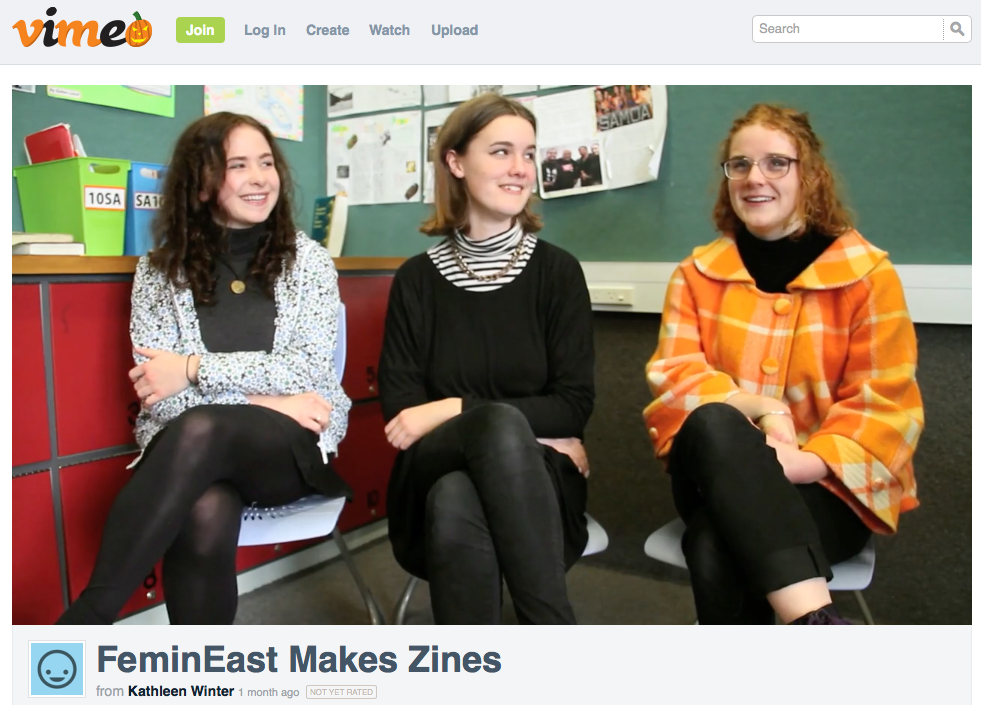 Find out more about FeminEast in this awesome video!
1. You run a group called FeminEast with Bella and Jess, tell us about it – how did you start it, how long has it being going, how often do you meet, who’s involved?
FeminEast is a group of students at Wellington East Girl's College. For over a year now, we've met every Friday lunchtime to talk feminism. We're primarily a discussion group (current events, theories, personal stories) but also have advocacy intentions and try to be active with our feminism. About 25 people regularly come to meetings and we have a facebook group of 200. The three of us run have been running the group for the past year and are passing it onto three more year 13 leaders for 2015. 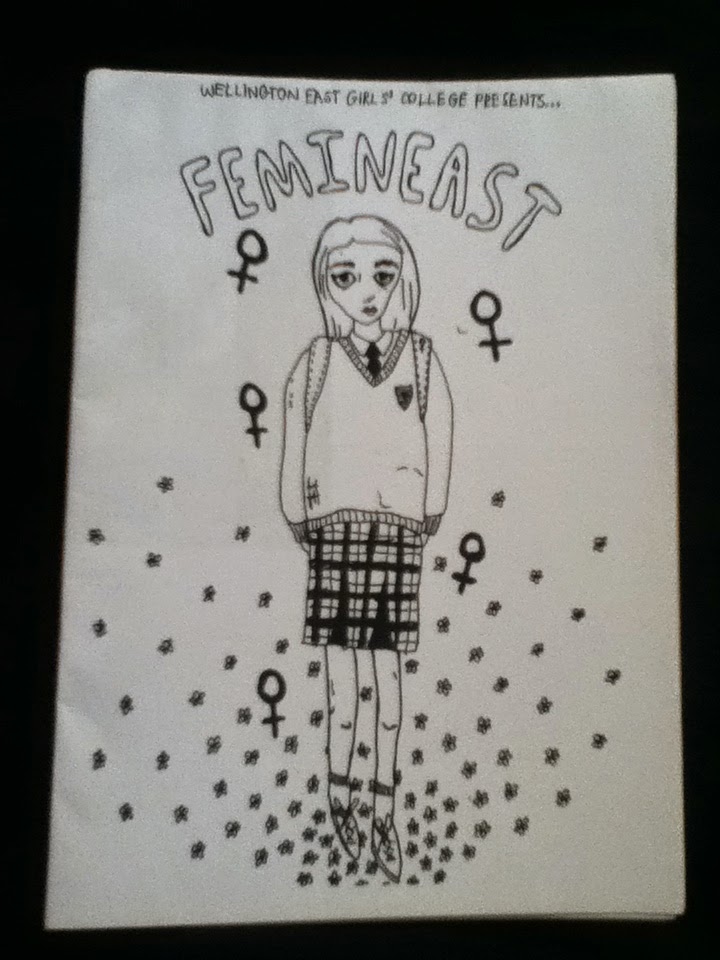 2. How would you / your club define feminism today?
It's a tricky thing to narrow down, as feminism means something different to everyone but generally I'd say our perspective on modern feminism is that it must be intersectional and accessible. Oppression exists across multiple axis and all forms are interlinked. Understanding the complex relationship between oppression and privilege is key. I think it's also important when trying to tackle any scenario of inequality to think about the big picture and the context which lead to the situation.  As teenage girls in New Zealand we try to balance our focus on both global ideas and local issues that effect us. Feminism is both a way of seeing the world and seeing yourself. Therefore, FeminEast aims to make positive change on a community level but also to empower the individual. We want teenage girls to feel validated and important and understanding Feminist ideology greatly effects self-assurance. Often when faced with sexism it's hard to know what to say. The great thing about having regular discussions, is that the students learn the language to describe their experiences with inequality. This means they are able to vocalise their thoughts and express themselves which is hugely empowering.
As an overall definition though, I'd say feminism is an active desire for gender equality and equity. 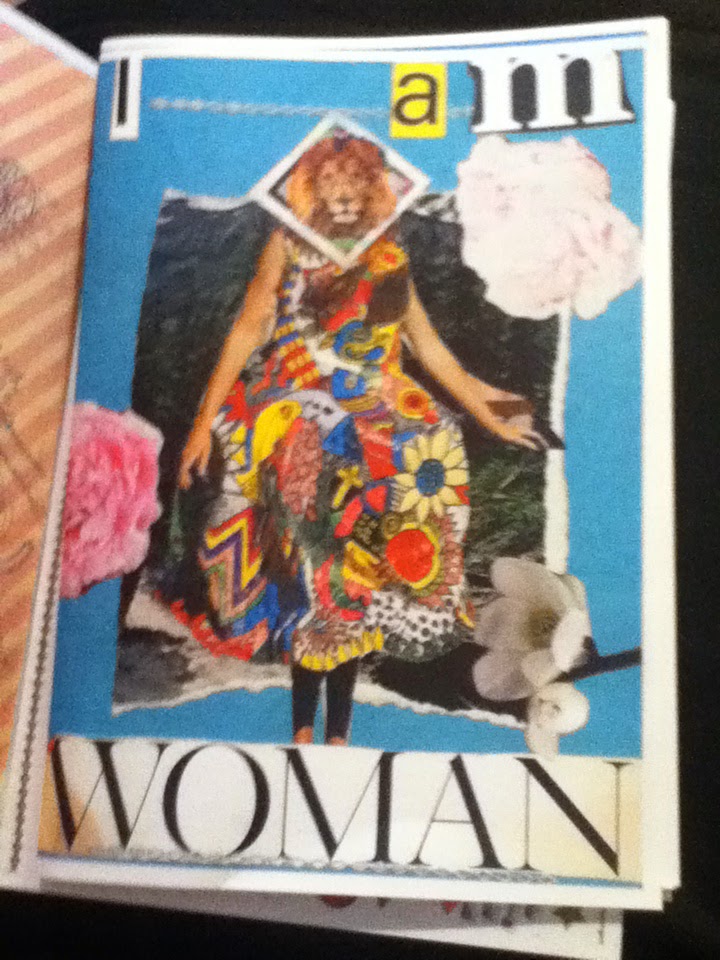 3. Does your club focus solely on feminist zine-making or are there other activities you do together?
Zines are a bi-product of our learning. We run the group by splitting the year into topics, investigating the ideas and then presenting our findings into zines. We've made zines two different ways. Our 'Intro to Feminism' and 'Gender Roles' zines were carefully structured to communicate to our audience. About 10 girls were involved in making a different page for these zines. Our other zine was made in a collaborative session where (aided by Cute Bruiser) we all made a page to contribute to a zine that expressed what feminism meant to us. So yeah, zines are an extra thing we do. Aside from discussions, as a group we've organised guest speakers for the school, gone to the End Domestic Violence protest, attended various gender equality events around Wellington and done charity work (including donating to Shakti Women's Refuge and raising $1028 for SHE28). We also have a lot of pizza parties, shared lunches and have fun.
4. Why did you start using the zine format to explore critical topics like feminism?
I got into zines the same time as I got into feminism, so in my mind they've always been connected. Stemming for Riot Grrrl and evolving into the modern day feminist zines have been a way for people to publish ideas independently. I think it's amazing that a group of teenage girls can come up with a concept, express it and distribute it. It's incredibly validating to see your own ideas validated into print. It's pure expression. In a society where so much media is told from a male perspective or unconventional ideas are censored, the independency of zines is invaluable. Also zines are so fun! They are creative, cute and accessible. Our school peers are far more likely to read a colourful booklet with images and stickers and handwritten ideas than a block of text on feminism. Zines were the perfect medium for FeminEast because they could be made entirely by teenage girls and would be read by teenage girls. 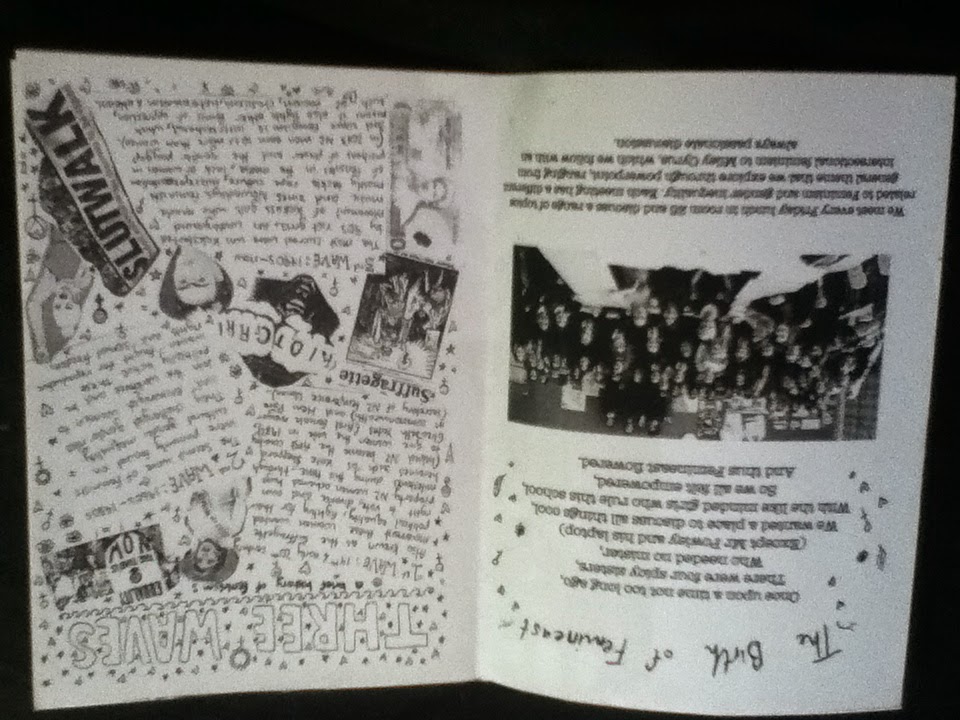 5. What do you do with your zines once you’ve made them?
Once we've used the dregs of our allocated printing money/ hacked some unused printing accounts and had a folding workshop, we distribute our zines to the school. We advertise to the students and then take them around to classes for a few days. We usually ask for koha to help cover printing costs. I'd say we give out about 200. The zines don't just stay at East either, they filter out into the wider community. Friends at other Wellington schools (of all genders) often ask for them and we've got some at the library. Zines are a unique medium, because they are special enough not to want to chuck out but unlike a book that you feel a need to keep. People are very good at passing zines on, a brilliant way of sharing the knowledge without having to waste on too much printing. There is something special about a physical piece of media. It's somewhat of a novelty, which means people are more likely to read it rather than ignore an email. In saying that, we intend to upload our zine to a blog so that anyone, anywhere, anytime can see it.
6. What advise would you give to other secondary school students who would like to start up a similar club?
GO FOR IT! FeminEast has been a 100% positive experience. Many students were already quiet feminist and plenty of the ones who weren't have started coming along to meetings. Our principal commented the other day that FeminEast has changed the attitudes of the school, because even those who don't have anything to do with the group know it's there. Starting a feminist club raises the profile of feminism and shows that it's important, which has a great ripple effect among peers. There are lots of Feminist clubs in Wellington schools and I've had people at Wellington College talk about starting something similar which is a huge change. So if this sounds like something you'd be keen to do I'd completely reccomend it. Three bits of advice:
-Because feminism addresses controversial issues, as leaders in a school environment you need to make sure the group is a safe, open place. Occasionally we've had to avoid certain discussions, or mediate a bit of tension. It's completely natural, just something to be aware of.
- Reinforce the basics. This can be hard, because if you're someone who knows a lot about feminism you're going to be keen to delve into the complex questions. However you're likely to have a constant stream of newcomers, often wih veery little prior knowledge. Keep linking deeper ideas back to the simple fundamentals and define terminology often. This way your club will be accessible.
- Have fun with it! Don't let it become a stressful or negative experience because it will tarnish peoples association with feminism. Part of feminism is being fulfilled and happy and proud of who you are, so little exercises which enhance this are a good way to keep the group positive. For example last week we had a cupcake icing session, loosely based on the idea that 'you make the decision over how you look'. Frivolous but fun. This will attract more people to the group, and establish a strong community of friends.
Posted by Wellington Zinefest at 7:59 AM 1 comment: